Did you know that The Lion King was actually made by Disney's "B-team" as the "A-team" was busy working on Pocahontas that same year? The beloved 1994 animated film has won over the hearts of audiences all around the world, and it is filled with numerous fun facts you can bring to your next trivia night.

The voice acting in the movie was truly top-notch, but the soundscape of the characters could have been very different had things gone another way.

Question: James Earl Jones and Madge Sinclair, who voice Mufasa and Sarabi in The Lion King, also played king and queen in what movie?

Question: Who did Disney want to cast to voice hyenas Banzai and Shenzi?

Question: Which performer sings Hakuna Matata and Can You Feel the Love Tonight?

Question: Nathan Lane and Ernie Sabella, who play Timon and Pumbaa in the movie, originally auditioned for what characters?

Question: Who was the original director of the movie?

Question: Why did Scribner leave the film?

Question: What famous Star Trek actor was considered for the role of Zazu? 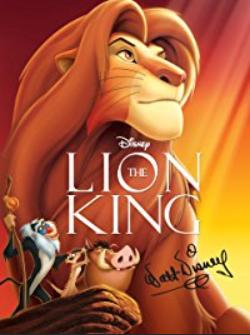 The characters in The Lion King have their share of secret fun facts too.

Question: What language do the names Simba, Nala, Sarabi, Rafiki and Pumbaa come from?

Question: What does the name "Simba" mean?

Question: What does the name "Zazu" mean?

Question: Rafiki and Scar were originally conceived as what animals?

Question: Nala was originally supposed to have a younger brother in the movie. What was his name?

Question: Who took over for singing the last third of Scar's Be Prepared after Jeremy Irons threw out his voice?

Boost your trivia knowledge of the film by taking on these factoids.

Question: What Shakespearean play served as inspiration for the plot of the movie?

Question: What was the original title for The Lion King?

Question: How do you translate the opening chant from Circle of Life?

Question: How long did it take to complete the iconic wildebeest stampede scene?

Question: How many copies of the official movie soundtrack have been sold?

Question: What "bug-eating song" was eventually replaced by Hakuna Matata instead?

Question: There are two pairs of "hidden Mickey ears" in the film. Where are they?

Question: Where does The Lion King rank in the American Film Institute's list of the top animated movies of all time?

Question: Where was the world premiere?

If you are interested in learning more about The Lion King or other Disney movies, consider checking out these online resources.

It's always interesting to learn about what was going on behind the scenes of your favorite movie. The Lion King is a beloved treasure, and now you can appreciate it even more with these fun trivia facts in your back pocket. It means no worries for the rest of your days!

Comments
© 2006-2021 LoveToKnow, Corp., except where otherwise noted. All Rights Reserved.
Questions and Facts About Disney Movie The Lion King