There's something magical about a good Christmas movie that blends holiday cheer with laugh-out-loud comedy. Each film on this list has won or was nominated for an award or has been generally embraced by the culture as a comedic classic.

A Christmas Story won the 1984 Genie Award for Best Achievement in Direction and Best Screenplay. It also ranked #3 on AFI's top 100 comedies. It stars Peter Billingsley as the boy Ralphie navigating the highs and lows of the holiday season.

Elf has become a regular addition to the list of classic Christmas movies given prime syndication during the holidays. In 2004, star Will Ferrell was nominated for an MTV Movie Award for Best Comedic Performance for his portrayal of the raised-by-elves human who ventures from the North Pole to New York City to find his dad.

The 1990 classic Home Alone stars Macaulay Culkin, Joe Pesci and Daniel Stern. Culkin's character Kevin is mistakenly left at home during Christmas and must defend the house from two thieves. It was nominated for the Golden Globe for Best Comedy or Musical in 1991.

A Charlie Brown Christmas, which tells the timeless tale of the comical Charlie Brown as he prepares a Christmas play, was the 1966 winner of the Primetime Emmy for Outstanding Children's Program. It features the voice of creator Bill Melendez as Snoopy and Peter Robbins as Charlie Brown.

2011's animated film Arthur Christmas features talents such as James McAvoy, Jim Broadbent and Bill Nighy. It tells the story of the modern tech-driven Claus family getting back in touch with the Christmas spirit. Bill Nighy's role as a crotchety Grandsanta was especially hilarious, and he won an Annie Award for his performance.

The Star is a 2017 award-winning holiday film that depicts the Nativity Story from the hilarious perspective of animals. It features the tremendous voice talents of Keegan-Michael Key, Tracy Morgan, Oprah Winfrey, Gina Rodriguez, Zachary Levi and many others.

The Nightmare Before Christmas is not an obvious laugh-fest like Elf, but it has been recognized for its many funny scenes, especially when Jack tries to take over Christmas with his comical Halloween style. In 1994, it won many awards, including the Nickelodeon Kids' Choice Award for Favorite Movie.

National Lampoon's Christmas Vacation has become a Christmas cult classic. It was directed by the master of cult classics himself John Hughes. Major media outlets have gone so far as naming it the best Christmas comedy ever made. Chevy Chase leads the Griswolds through their Christmas festivities that inevitably turn into a hilarious disaster. 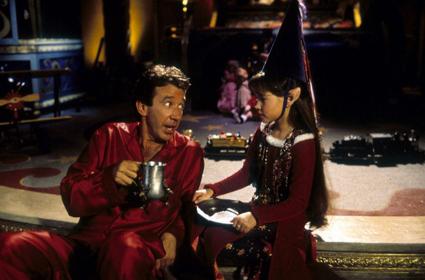 Tim Allen in 'The Santa Clause'

When it comes to Christmas comedies for the whole family, The Santa Clause was a clear winner when it was released, and it still finds regular syndication during the holidays. It won the 1995 People's Choice Award for Favorite Comedy Motion Picture. Tim Allen stars as a workaholic who finds himself slowly transforming into Santa Claus.

How the Grinch Stole Christmas!

The 1966 short film How the Grinch Stole Christmas! has become a Christmas tradition, particularly loved for its soundtrack. Narrator Boris Karloff won a Grammy for Best Recording for Children. It tells the comical but endearing Dr. Seuss story of the Grinch and his plot to ruin Christmas.

The Muppet Christmas Carol was a 1993 Fantafestival winner for Best Direction. It starred Michael Caine as Scrooge and iconic Muppets as the three ghosts in a hilarious and endearing retelling of A Christmas Carol.

Emmet Otter's Jug-Band Christmas has become a Jim Henson classic. It was nominated for four Primetime Emmy Awards in 1981, and Sony Pictures released a 40th anniversary edition in 2017. It tells the quaint story of Emmet Otter trying to win a jug-band competition so he can afford to buy his wife a present.

If you need something edgier and more action-packed, the classic Bruce Willis film Die Hard has long been appreciated for its Christmas theme and great comedic moments. Moviefone goes so far as to name it as the best Christmas film ever.

Bill Murray's 1988 holiday film Scrooged was a Saturn nominee for best actor. Although its PG-13 rating makes it an older-viewers-only Christmas classic, many fans love of its comical rendition of the classic Charles Dickens story in which a TV executive changes his ways after he is visited by three ghosts.

Christmas With the Kranks

Movie fans either love Christmas With the Kranks or they hate it. Tim Allen and Jamie Lee Curtis decide to skip Christmas for a tropical vacation instead. Meanwhile, Dan Aykroyd and other small town residents harass the couple for dissing the town's beloved Christmas traditions. Although some people do not like the film, it has been embraced by families and younger viewers. In 2005, it won the Young Artist Award for Best Family Feature Film - Comedy or Musical, and Tim Allen won Best Actor in the Nickelodeon Kids' Choice Awards.

Christmas movies have become important holiday traditions like Christmas dinner or opening presents. Although you may disagree or debate which movies belong on the list of must-watch funny Christmas movies each year, it is always a tradition that brings light-heartedness to the holidays.