Hardcore Henry is a bold new take on action movies. For the first time, the audience sees through the eyes of the action hero for 90 straight minutes, and the film never leaves that point of view. Director Ilya Naishuller first experimented with a first-person point of view in a music video for Biting Elbows. Here, he explains how he made an entire movie from this angle.

Since the entire movie unfolds from Henry's point of view, Henry himself never appears on-screen. In the beginning of the film, Henry wakes up in a doctor's office/science lab, and the camera looks down to see Henry's arms and legs. Estelle (Haley Bennett), Henry's wife, is also the scientist who has rebuilt Henry with cyborg enhancements. Before Estelle can complete Henry's training, Akan (Danila Kozlovsky) attacks with his men and forces Henry to escape. Estelle didn't even have time to install a vocal chip so Henry cannot speak.

It turns out this lab is flying and Henry, who was part of the experiment, has to jump. He makes it to the ground but then has to find Akan and rescue Estelle, whom Akan has kidnapped. Henry has some help from Jimmy (Sharlto Copley), a friend who keeps surviving deadly attacks and shows up fully healed whenever Henry needs help. Through the entire movie, the audience sees Henry's point of view as he runs through Russia, fights off Akan's assassins, and searches for clues to explain who he was before Estelle's experiment, and why Akan wants to capture him.

It takes more than one man to bring Hardcore Henry to life.

At first, filming an entire movie from the hero's point of view might seem like a good way to make the audience feel like they're in the movie. In reality, it makes the audience appreciate how much they take for granted about regular movies. It is much easier to convey information by cutting to different angles. Now that director Ilya Naishuller gave up those options, he forces the audience to experience the hero in a unique way.

The chases and fights of Hardcore Henry would be exciting regardless, but keeping them all in focus, when Naishuller only has one angle, is even more impressive. Avid video gamers are experienced in taking in information this way, yet it is surprisingly still relatively new to cinema. (A 2012 remake of Maniac takes the killer's point of view but focuses on the suspense of a killer stalking his victim rather than aggressive action.)

To ease viewers into this style, Naishuller knew he could not throw them into the deep end. The early sequence of Estelle guiding Henry is also meant to guide the audience into Henry's point of view. "It was really a question of how you gently put the audience into the POV," Naishuller said. "It was a question of getting people into it as gently as possible so they have as much of a good time as possible. It was a big concern. That's why we do it slowly. We don't start with an action scene. I was very tempted to."

The action in Hardcore Henry lives up to the title. The fights and shootouts are so bloody, they push the boundaries of what can be shown in R-rated movies. This is partly just to be bold, but also partly integral to the style. In a normal movie, the director can cut away to a reaction shot before blood sprays all over the place. Henry cannot cut away to a different shot to avoid looking at the violence he's wrought. The audience must be confronted with it as he is, but that audience ought to be over 17.

Fans of this type of action will enjoy seeing it from a new perspective although different critics have reported struggling with exhaustion. It would be thrilling for any movie to stage a car chase where the hero drops a grenade in a van and blows it off the road. Many action movies include a shot where the heroes walk away from an explosion in slow motion. Hardcore Henry must be a first where the explosion shrinks away as it blows Henry up into the sky. 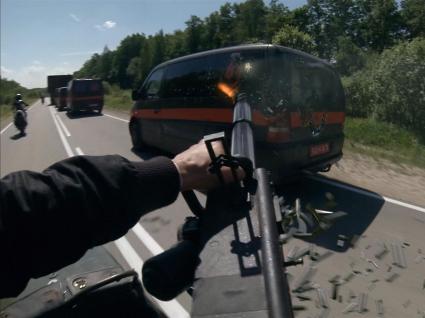 "It's composed of two shots," Naishuller revealed. "The first one, he throws the grenade in, there is an explosion, the explosion is real. He gets yanked off the van by a crane going 35 miles per hour. The van goes flying out from under him. He's flying up in the air, he looks down and when he looks down, we cut. [In the second shot,] then he lands on the bike."

Editing technology now allows filmmakers to blend two different shots together to make a continuous sequence. The film Birdman used this technique to create the effect that the entire film occurred in one single camera roll.

The angle from Henry's eyes also changes the way the audience will relate to the supporting cast. Usually, a director can give each actor his or her own scenes to define their characters. In Hardcore Henry, Estelle, Jimmy or Akan only appear when they are in front of Henry. Naishuller cannot even give them a close-up to hone in on their nuances. Yet he finds clever ways to give them moments in the middle of Henry's frenetic journey.

Jimmy is bubbling with enthusiasm even as he gets murdered in scene after scene. Estelle finds moments to help Henry even when Akan has the upper hand, and Bennett exudes sincerity in those moments. Akan is clearly a big villain but he can't have random evil scenes where he kills innocent people, so it all has to happen in front of Henry. Kozlovsky seems to relish being extra evil to make sure we all get the point.

Behind The Scenes: Who Is Henry? 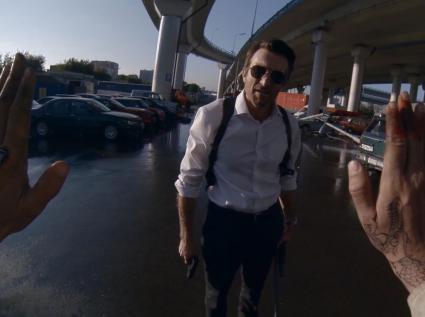 Perhaps the biggest disadvantage to shooting the entire movie from Henry's point of view is that the audience never actually sees him. Therefore, how can they relate to the hero of the movie if they never see him? So Naishuller subtly builds Henry's character through his actions and what we see around him.

The film opens with a flashback involving Henry's father (Roth), but that is mysterious since it has no context until the end of the film. Since Henry cannot talk either, Naishuller conveys his personality entirely using the camera. Where he looks creates a sense of what is important to him. For example, there's a lot of chaos going on but he keeps looking to Estelle.

In the end, no one actor plays Henry. Each "Henry" is a cinematographer or stunt man wearing a GoPro camera to perform and record Henry's actions. "It's about a dozen, maybe 13 [people]," Naishuller said. "There was two main ones who shot about two-thirds of the film, Sergey Valyaev and Andrei Dementiev. Then the other 11 would be for the calmer sequences." 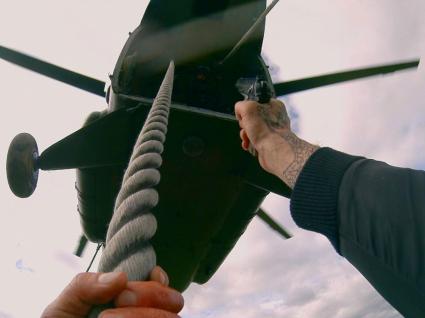 In addition to the 12-13 main Henrys, Naishuller found a few more specialists were required for individual stunts. "There's another nine or 10 who are very specific stuntmen," Naishuller said. "Like, you have to be set on fire? There was one guy we set on fire. The guy who rides a horse was the horse wrangler. The guy who falls off the helicopter was a base jumper, so there's lots of very specific things that could only have been done by very seasoned professionals rather than me and my friends."

Any scene in any movie requires a painstaking amount of coordination between the elements. Hardcore Henry is especially sensitive because it has to preserve the sense of Henry's point of view. The slightest move off kilter could destroy that. This includes when Henry holds a gun and his hand appears in front of his face, or making sure he looks in the right direction when an explosion goes off.

"The way it works is that sometimes you have shots that have three elements that have to happen correctly for the shot to work," Naishuller said. "Like, you've got to turn correctly, you've got to pick up the gun correctly, a squib (blood pack) has to go off at the right time. When it gets really difficult is 12-15 elements in a single shot. That's when you're entering incredibly complicated territory for the planning and the timing has to be perfect."

Hardcore Henry is full of complicated scenes like that, but Naishuller discussed a particularly complicated one. Henry is perched on top of a building picking off enemies like a sniper.

"In the sniper sequence, five guys and a camera operator have to be perfectly timed with each other," Naishuller said. "There's one take [where] he shoots the first guy, he looks up, he's got to find the second guy. They all have to react at the same time as the shooter shakes the camera. Those things get harder and harder and harder." 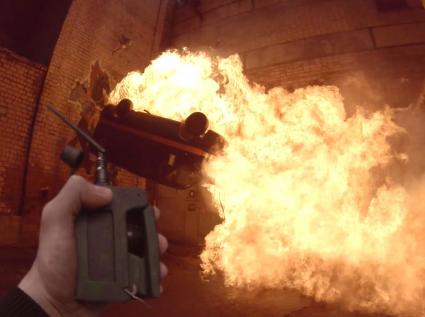 GoPro was the predominant camera of choice for Hardcore Henry because its small size allowed it to fit on camera operators' heads without restricting their mobility. Given the complexity of movement in Hardcore Henry, holding a larger camera was not an option for the cinematographers and performers.

The advantage of flexible mobility came with a caveat. GoPro photography is typically lower quality. It works for an extreme sports YouTube video, but not on a big movie screen. Naishuller said he shot one percent of the footage on professional grade Red or Canon 5D cameras. He then used post-production color timing to match GoPro shots to the best-looking footage. The result is somewhere in the middle.

"We had a colorist who does all of P.T. Anderson and Christopher Nolan's movies, so you can bet that guy is very good at what he does," Naishuller said. "You sit and you just work it, as well as having a truly fantastic director of photography as well. I was fine that it had to look raw and very sort of aggressive. So the question is how do we take that, use a GoPro and make a feature for 90 minutes that will hold your attention as well as visually be somewhat pleasing? It was just a lot of work. You figure it out. That's what any art project is. You figure it out."

Hardcore Henry is not just a gimmick. This is an exciting, violent adventure and knowing all the trouble Ilya Naishuller went to so that it would work only makes it more stunning.