Film genres are used to categorize movies based mostly on plot lines, but also taking style, setting, and characters into consideration. Genres can overlap, and many movies fall into more than one broad category. The following genres are the most common ones used to classify films.

Like some other genres, the plot of this type of film usually revolves around a battle between good and evil. The characters can range from everyday heroes and bad guys to high-tech robots and machines. Most big-budget films are action movies, simply because of the cost involved in putting these blockbuster scenes together.

Examples of action movies include:

The adventure genre is based on story-telling. Often combined with at least one other genre, such as action or science fiction, adventure films weave richly detailed settings together with a plot based on a journey or quest. Common themes in adventure movies include time travel, treasure hunting, historical time periods, and coming of age. These movies often contain a moral or social commentary. Some examples of adventure films are:

Any movie that is designed to make people laugh falls under the comedy umbrella. Whether it's an animated movie suitable for the whole family or a bawdy adult film, if it's meant to be funny, it's a comedy. There are many sub-genres of comedy, including romantic comedies, physical or slapstick comedy, and dark comedy. In this genre the plot is usually light, with the focus on the actors and their ability to amuse their audiences. The following films are considered comedies:

Crime films are almost always dramatic in nature, encompassing the many angles of both enforcing and breaking the law. Plot lines most often focus on the criminals themselves, from petty thieves to mafia or international crime rings. Other crime films feature the men and women who fight crime, from traditional police officers and detectives to elite groups established under a cloak of secrecy. Examples of crime movies include:

The drama genre is wide, encompassing almost any movie that combines a serious plot with believable characters. The stories told in dramas revolve around the characters themselves as they face conflicts, both external and internal. Many drama films are biographies of real or fictional people, while others delve into serious issues such as politics, illness, substance abuse, and relationships. Some good examples of dramatic films include:

Epic movies tackle larger than life settings, often with a very large cast, to tell a story in the most dramatic and extravagant way possible. These are often historical or mythical pieces, covering subjects like battles, royalty, biblical tales, and mythical figures. While the story itself is important to the film, the real impressions are made with elaborate costumes and sets. Epics are expensive to make considering all the lavish details, and they tend to draw big-name Hollywood actors. Some epic films that you may recognize are: 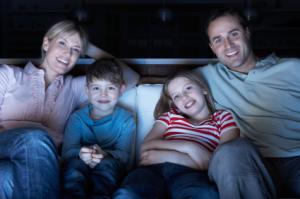 Family movies are for all ages.

Family is another movie genre that includes many forms. These are films that are fun for the entire family to watch together, from children to grandparents. Disney films are great examples of family movies, whether they are live action or animation. Family movies often include teaching moments when characters deal with issues or situations familiar to kids. These films are often comedic in nature but can also include drama and other film genres. A few titles from the wide range of family movies are:

Horror movies are intended to frighten and thrill audiences, using a number of different techniques. From gory slasher films to disturbing psychological thrillers, horror movies play on fears and edge-of-your-seat drama. You'll find many themes in these movies including monsters, the paranormal, serial killers, and the occult. Classic examples of horror films include:

If the main hook of a movie is its soundtrack, chances are it's a musical. Musical films incorporate songs and often dance numbers into the plot, making them the highlights of the storyline. Sometimes the music is written for the movie, while other times it's the other way around. Musicals can be adapted from a theater production, or even based on the biography of a musician or singer. If you're interested in seeing what musicals have to offer, try one of these titles:

Science fiction movies take viewers into a world of amazing and futuristic technology, where space travelers roam innumerable universes, aliens live amongst us, and almost anything is possible. From mad scientists creating new life forms to brave explorers conquering time travel or outer space, science fiction pushes the boundaries of what is possible or what might be possible in the future. Examples of science fiction films include:

Westerns encompass some of the earliest films in American history, detailing life on the early frontiers. Gun-slinging cowboys battling natives, exploring the land, staking their claims, and winning the hearts of fair damsels are all common themes in Western films. The "Wild West" is the backdrop to these tales, which feature all the classic trademarks like saloons, horses, and heroes. Some good examples of Westerns include:

As a movie watcher, you can use these film genres to narrow down your search for an appropriate film to watch. Whether you're buying, renting, or streaming a movie, most stores and websites sort their titles by genre, making it easy to select the type of film you want to see. Though numerous movies fall into more than one category, the overall characteristics of plot, characters, and setting will usually place any film into a well-defined genre.